Small notes (for the freaks)

Several records were actually recorded in Kaipa's rehearsal room located at the address Hamnesplanaden 9 in Uppsala. Today this street has a new name. The address is Sammaritergränd 7.

2. "Roine Stolt: Fantasia". There is no information on the original album sleeve about where this record is recorded, but parts of it are recorded in the rehearsal room.

3. "Hans Lundin: "Tales" recorded at Sonja Studio. The rehearsal room was located in an old factory, which once produced chocolate and was called "Karamell och Chokladfabriken Sonja".

4. "Hans Lundin": Visions of circles of sounds" recorded at Sonja Studio. These recordings were actually made in the basement of Hans' parents' house.

Kaipa undertook two tours with folksinger Lasse Tennander. Lasse opened the show with a solo acoustic guitar set. For encores, the band came back with Lasse and would perform some of his songs adding a bit of "Kaipa- atmosphere", so that all the musicians could end the gig together. The first tour was in October 1975, and the second one in April 1977. The collaboration peaked on August 17, 1977 with a live recording, recorded by Swedish Radio, at an open-air festival at "Gärdet" Stockholm.

The single "URA KAIPA: För sent/Bay-e bay-o" (1974) actually consists of two songs from the unreleased second album by San Michael's recorded in 1972, with Hans Lundin and Tomas Eriksson together with Gunnar Westbergh on drums and Nane Kvillsäter on guitar.

Some of the words to songs on the album "Händer" were actually written by Mats Löfgren the last minutes before the recording the vocals.

Two songs recorded on the album "Hans Lundin: Tales" were played by Kaipa live on the long tour 1981. The song "Ripples" was the opener, and the first part of "Narrow escape" was used as a joker forcing Max and Hans to progressively increase the tempo.

Crew and sound engineers working with the band on tours.

KJELL ERIKSSON: Twin brother of Tomas Eriksson and a close friend of Hans Lundin since 1967 when he started work behind St. Michael Sect. Accompanied Kaipa on many tours, especially during the years 1979-1980.

Some of the important people who gave the band more than one helping hand, and not mentioned in other places in this story.

All the others not mentioned but remembered in our hearts 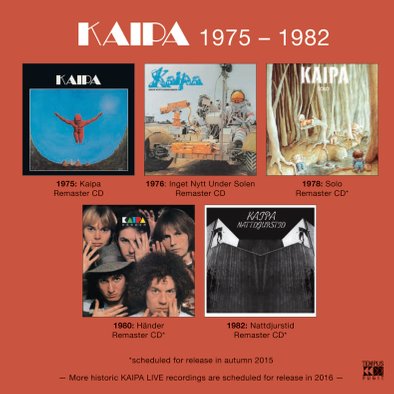