Reviews: In the wake of evolution 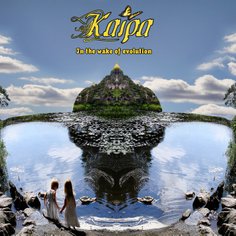 I think most prog fans would travel great distances barefoot over stony ground to hear music like this and there are many, many bands I can think of who would doubtless give their eye teeth to create something as lavish and sumptuous as In The Wake... The album opener (and title track) alone is worth the cost of purchase. It's jaw-dropping, eyes full of wonder, joyous listening. It gambols into life through a bouncing, trilling overture in 11/8, a time signature that declaims, "Oh, this must be prog!" This comes to an abrupt halt and Aleena begins the heartfelt and impassioned vocal, a melody I cannot get out of my head. Each verse has its own cadence that develops via the accumulation of doleful strings, weeping in descending arcs then a chopping and funky clavichord that lifts the melody out of the doldrums in a way that makes me want to applaud as the track ascends into its closing theme using melodies and harmonies that recall Fragile-era Yes with Jon Anderson and Chris Squire at their best. Structurally and musically this is extremely clever stuff, the leitmotif of the "overture" is twisted, tilted, deconstructed and remixed in four different ways, at least. The musicianship is stellar. Per Nilsson sends a resounding signal about the multitude of tones and playing styles he is going to employ over the course of these eight tracks. In the opening alone he uses at least four different amp set-ups to effect his sound, introducing a new tone at each reiteration and development of the theme. Interspersing the sung sections he zips through four solos varying hammering and sweeping arpeggios with Steve Hackett-like sustained wailing and Robert Fripp-esque sonic soundshapes. Jonas Reingold's bass pops and stabs, rolls, hops, skips and runs through the phases of the song underpinned by Morgan Agren's drumming that drives the whole piece to its emphatic and dramatic conclusion with a host of polyrhythms and syncopated figures. Awesome, awesome, awesome. 9/10

In short, "In The Wake Of Evolution" is pure genius. The intricacy in which the melodies dance alongside and around each other on each track, as well as the sheer diversity of the album's content, is mind-blowing. Kaipa truly smash up the musical barriers that restrict so many artists, never allowing them to reach their potential. Are you looking to get away this summer? Why bother spending money on fancy hotels and long, cramped flights when Kaipa can take you to a new, exciting world with every song, the only restriction being your own imagination. Sit back, close your eyes and enjoy the ride. 5/5

"Arcs of Sound" and "Electric Power Water Notes" & "Smoke From a Secret Source" round out the record's grass rooted art-rock approach with mind-bending improvisations and insane time signatures/key changes, again further exposing the band's strengths upon musicianship and melody.

In Wake of the Evolution is another tried and true testament to classic progressive rock with a modern flare - still knowing no boundaries when pressing on with their compositional approach and showing that the headroom is unlimited when it comes to executing an impressive musical mindset. 4,5/5

It was a wise decision to bring the band back and it is almost clear from the very first track that this new album may very well be the jewel in the crown. Flower King Roine Stolt departed a few years ago and a little later Scar Symmetry's Per Nilsson joined Hans Lundin as creative partner. Long songs on the album full sparkling prog rock; melodic, contemporary and washed in a superb sound. Listen to that "Electric Power Water Notes", with almost eighteen minutes the longest piece, uncovering beautiful secrets. But also the short and folky "Folkia's First Decision" and the varied "The Seven Oceans Of Our Mind", what a musical enjoyment. This is Kaipa's best album, hands down. Sincere compliments to our European neighbours from the north. 95/100

This is most definitely the best release in the progressive genre this year. The eight songs featured on In The Wake Of Evolution are of a unseen quality and are just simply sublime. Highlight on the album is of course the almost eighteen minute lasting song Electric Power Water Notes which takes you on a trip through the folky progressive Kaipa landscape.

If you are a prog lover, just go out and buy this album without hesitation. Eight extremely strong compositions, beautiful melodies and yet unmistakably Kaipa. It will be very difficult for any band in the genre to release a stronger sounding album than this one. 10/10

From the first note of this album, you hear the maturity in the sound and in the compositions. These guys know what they are doing. It's the second album with Per Nilsson on guitar and he fits better in the band than Roine Stolt, without doubting Roine's skills. The quality of his solos is extremely high. And this goes for the speedy, heavier solos as well as for the quiet acoustic pieces.

The most important style in Hans Lundin's writing is of course progressive rock. Just listen to the title track (11 minutes) and Electric Power Water Notes (18 minutes). Two tracks that must please every progressive rock fan. What a variation and what a high quality of musical skills. Patrik and Aleena are both singing their hearts out and are so wonderfully fitting together.

This is powerful, imaginative, passionate music delivered by a great crew of brilliant artists.

Gonna be hard to top this one in the prog genre this year. They get the season and year off to a very strong progy start! Thank you for the opportunity to hear this! 10/10

The line-up takes us on exciting excursions into a timeless universe of progressive rock. But fear not, the sound is still deeply rooted in the 70's and "In the Wake of Evolution" is a logic step forward from "Angling Feelings" from 2007; a logical continuation of colourful soundscapes they painted on that album.

And the step is a big leap forward; everything has taken at least a step up the latter. The songs sound more mature, are better constructed and they have had an eye for details on this album. Star of the show is in my opinion Aleena Gibson; her interpretations of Hans' compositions and melody lines are superb, she takes this album up a notch and the performance from the rest is flawless and shows a technical sound band at its best. 85/100

There are very few progressive bands who are composing music that really carries the same feeling of experimentality and curiosity about blending music into a cohesive whole that is at once intellectually stimulating, catchy and engaging. Kaipa embodies this feeling of progressiveness on their new album and I suggest that open-minded fans of progressive music check this out, because it is a fascinating ride. 4.5/5

Overall this is an outstanding album. It is at a very high level with respect to both creativity and instrumental performance. The band establishes a very distinct style in this album and stays true to it from start to finish, but still manages to keep the music fresh.

"In The Wake Of Evolution" stands for superb prog rock with lots of different influences.

Listening the album you can hear that the band played together for many years. It also complements the quality of writer and composer Lundin. Again he succeeded in making 8 new jewels. The combination of the bright male vocals (Lundström) and the somewhat harsh female vocals (Gibson) is terrific. The vocals of Gibson are very emotional; from the first song on (the title song) she is able to give the songs an extra dimension. Add some great melodies and solos to it, supported by a strong rhythm section and you have a remarkable prog rock song.

The long "Electric power water notes" (it takes over 17 minutes) has mostly male vocals. Although the songs last this long time it isn't boring at all; with lots of different atmospheres from prog rock to slow tempo parts; from symphonic rock to great heavy guitar oriented parts. There are long instrumental parts; every part has beautiful melodies. Sometimes funky and jazzy influences but most of the time progressive rock. The title Electric power water notes makes clear the electric guitar has the leading part. Terrific guitar playing from melodic riffs to many solos. "Folkia's first decision" is the moment Kaipa is slowing down; it starts with baroque and ends like symphonic rock. The slow tempo "The words are like leaves" has very bombastic and powerful parts. The last song of the album "The seven oceans of our mind" starts with folk melodies to become a slow tempo prog rock song. After 3 minutes there is a quiet part in which Lundström and Gibson spread a lot hopeful wishes that is followed by bombastic orchestra and melodic solos that becomes a ballad varied with acoustic parts, power ballad parts and subtle guitar solos on a bed of beautiful keyboard sounds.

The conclusion is rather simple: "In the wake of evolution"is a must have for all prog rock fans and everybody that likes rock music with great melodies. 95/100