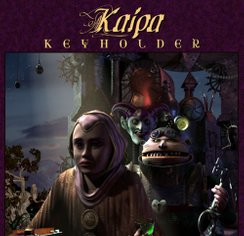 This CD offers up an intense session, filled with exacting musicianship that creates atmospheres that will linger in your consciousness long after the disc stops spinning. This is progressive rock for the ages brought to you buy two of the geniuses still making music with meaning and substance, Roine Stolt and Hans Lundin. 5/5

The music on this cd is fantastic, rewarding the listener with every possible element progressive rock has to offer. Keyholder easily rates as one of the best progrock cds I have heard yet this year, everything is done with perfection. There are no hints of the amaturistic piecing of musical pieces some bands are known for, everything flows with a graceful continuity. The band takes no shortcuts in creating majestic, complex yet melodic detours into instrumental territories, which exemplifies the musicians very best attributes. Be prepared to be impressed, only if you are a progressive rock fan, as this cd delivers the very essence of the genres greatest demands for excellence. You may even find this cd rated along side of your Relayer, Close to the Edge albums, as it compares to some of the most ambitious music done on a grand epical scale by the great Yes.

So the music in Keyholder, which swirls like an hypnotized snake in the hands of an experienced enchanter, does justice to the very rich history of its intervenient players, for it is comprised of each and every characteristic that has been making the delights of the progheads and their surrender to the exquisite quality of Scandinavian Sympho. The offer here is basically one of variety, good-mood, melody and enjoyment, but the band is perfectly able to translate complexity, emotional shifts and compositional richness into that fascinating result. So if you want to open the door of some of the best contemporary symphonic art-rock, all you have to do is ask the Keyholder to do it for you!

Every Kaipa release is what prog is all about; musical experimentation without limitation. Keyholder plunges us one again into the deep rolling sea of a musical acid trip. Filled with every color and texture, Keyholder paints extraordinary pictures with watercolors yet to be defined and thoughts yet to be collected. Any progressive fan will easily see the beauty and majesty of this grand expanse of musical freedom. Now sit back, relax, and ride upon the coattails of your imagination. Those who helped define progressive music are still the masters. 5/5

Kaipa are back with a brand new album that, to put it simply, is a true progressive rock masterpiece. The lengthy songs featured in the album have many changes, the arrangements are complex and the musicianship amazing. But the most important thing is that the songs are "real songs" and not just a display of their skills. The female vocals are emotional and the lady has one of the finest voices in rock while the male vocals are simply perfect for the kind of music they play. The melodies are very catchy and the more atmospheric passages enrich the album and they are a key element in the success of the album. There's a symphonic feeling in some of the songs and the Hammond is helping vastly in the creation of this symphonic feeling. In my opinion this is how progressive rock should be played and this is exactly how it should be produced. With a production that helps in the creation of the atmosphere and allows every small detail to surface and be heard in the right level. Invest. 9/10

It's all very retro, gloriously so, and - with nothing weighing in at less than six minutes - damn serious stuff. With frequently changing time signatures, this CD effectively whisks us back to another age. In fact, who needs to scrape out the old battered vinyl? This CD is all that's needed...there's even lashings of wah-wah. Tremendous! 4/5

This is right on the money, the hammer on the nail, excellent album! Keyholder is that kind of an album where you can't get it that almost 80 minutes have past while listening to it. You keep focused and paying attention to the wonderful music and that of course is a big compliment to the whole band. 9/10

Stylistically similar to Notes From the Past, Keyholder again updates the Kaipa sound with healthy doses of aggressive, keyboard oriented prog with a dashes of Flower Kings magic thrown into the pot. It's a winning formula folks. Keyholder is damn impressive, but looking at the roster involved with Kaipa now that should come as no surprise. Prog fans-run out and get this, pronto! 4,5/5

This is an album that has great depths. The quality of the material, the playing and the production are all superb and repeat listenings always seem to throw up something not heard before. At the end of the day, Kaipa have followed their previous success with another album that quite simply should not be missed.

After the 2002 release of Notes From The Past, many people would have thought the next album would be a hard act to follow, but Keyholder might hit the top of the annual polls as best album. From the impressive artwork on the cover, the near 80-minute music package lives up to expectations. Eight tracks of sheer quality make this my tip for the top. Hats off again to the writing talents of Hans Lundin and Roine Stolt, and the playing of Jonas Reingold and Morgan Ågren, and the vocal talents of Patrik Lundstrom and Aleena.

A proof of Kaipa's status as one of the purest symphonic outfits. The nice thing about this album is the fact that it's rather different than "Notes from the past" yet it sounds like authentic Kaipa throughout. This kind of means that the band has once again put it's recognizable stamp onto the music yet has broken new ground as well. Especially in the rhythm section the band now tends to rub shoulders with jazz and fusion without making it too obvious. It's that constant weaving of different styles which finally creates the "Keyholder".

Overflows with creativity, pinwheeling from calliope keyboards one minute to melodies so painstakingly executed, one senses the musicians straddle a trapeze that could fail at any second. It never does. The familiar melts into something new, something Kaipa. Just how the cascading melodies, left -field time changes and lithe vocals cohere is a mystery. Yet the disparate elements somehow connect. The music isn't so much catchy as it is fascinating, akin to exploring a carnival with different adventures around every corner. Whatever the case, Keyholder upholds Kaipa's reputation for breathless musicianship, catchy melodies and varied instrumentation. 4/5

Buy with closed eyes, if you are into Progressive. Excellent musicianship and killer melodies. There are plenty of ideas, and a well hidden catchy feeling, this same feeling that makes you unable leaving the album in the middle, even if you are not 100% into Progressive stuff. 10/10

The album opens with "Lifetime of a Journey," a classic Kaipa track that picks up right where Notes From the Past left off. One of the real pleasures of the reborn Kaipa is Patrik Lundstrom's terrific voice. He is, quite simply, my favorite vocalist in rock. 9/10

This year Kaipa seems to be determined to drive us all nuts! Because its new album is a more than valuable contribution to prog rock for the new millennium. And that is because the music of the new CD is the perfect mixture of progressive, rock, folk, symphonic, classical, lyrical music with some oriental touch! Roine Stolt (guitars) and Hans Lundin (keyboards) have opened their soul to create music with sense, sentiment and passion. Ah not to forget to mention Aleena's backing (and sometimes lead) vocals that add an even more impressive tone to the whole context. For me this CD might be the surprise of the year. Prog fans don't imagine missing this one. 8/10

Outstanding production quality, superb arrangements and evocative vocals characterise the second Kaipa album after their reburth. Keyholder is worth a trans-Atlantic journey and is certainly a must listen!

The whole CD is a highlight, and the 8 long tracks included take up to an incredible total playing time of 78 minutes! All the songs are winners, but my favourites are "A complex work of art", "Sonic pearls" and "Distant voices". All the Progrockfans can buy the second album of KAIPA! 8.5/10